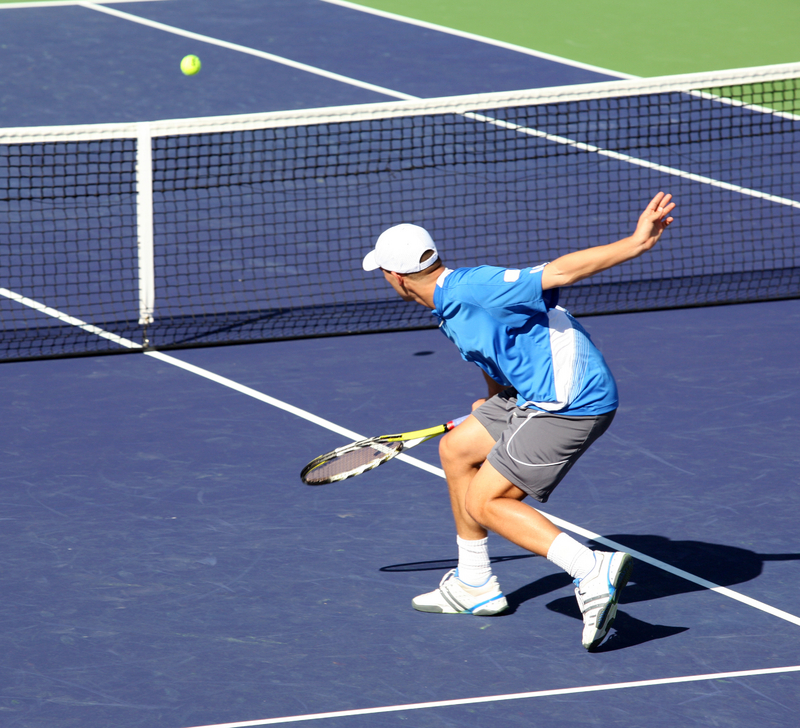 Over the years I’ve learnt so much from tennis coaches I’ve hired around London, and from opponents much better than me. Here are the top tips I’ve been given, and I hope you enjoy putting them into practice yourself:

Eye of the Predator

Remember those wildlife documentaries where the eagle is stalking its prey? It’s eyes are locked onto the next meal, its focus is 100%. This is the mentality you need to emulate on the tennis court. Think of the tennis ball as your prey. Keep your eyes locked onto the ball at all times during the point, right up to the moment of impact of the ball on your racket strings, and keep your head still through contact. Roger Federer is the best example of this skill.

Inject the same predatory instincts into your footwork and movement. Crouch into the athletic position when waiting for your opponent’s serve. Don’t just stand there flat-footed. Move to the ball with fluid movements, perfectly balanced, perfectly poised, like the lion pursuing the gazelle with deadly power.

This mentality is sure to eliminate nerves or self-doubt. Does the leopard look like it lacks confidence when it’s hunting? Not bloody likely! You’re the hunter, your opponent is the prey, the tennis court is the wilds of the African savanna, your kingdom. All your negative thoughts will melt away when you adopt the heart of the lion.

I owe this idea to a guy I saw playing tennis in West Ham Park tennis courts several years ago. It was a hot summer’s day and he was by far the best tennis player on the 12 courts that afternoon. People stopped their games to watch him play. He had the killer instinct with the skills to match and it showed. When he had finished his game I went over and asked him to coach me. I didn’t care whether he was a qualified tennis coach or not. Turned out he wasn’t, but he welcomed the chance to earn some extra money, and I learnt a lot from sessions with him over the next few months.

Always be Aiming for Something

The tennis coach I hired for the longest period was Phil Vivian, head tennis coach at Aldersbrook Tennis Club in Wanstead. One of his best ever tips was to always be aiming for a specific target.

When you serve, don’t just aim to get the ball into the service box, set your sights higher than that. Aim to hit into the body of your opponent, or to hit down the centre-line, or hit serve that pulls  your opponent out wide. Decide which of these three you’ll serve, and then serve. This is the only way you’ll learn to place the ball in the best spot in each situation.

When you’re hitting groundstrokes, how deep do you want the ball to land in the opponent’s court? A short ball in the service box gives a strong opponent the chance to move forward and attack, but if your opponent is standing too far behind the service line and is bad at moving forward, then the short ball may be your best option.

If you’re facing a strong and fast opponent, it’s best to pin them behind the baseline with deep balls, which land between the service line and the baseline, ideally closer to the baseline but not dangerously close so it risks landing long. Decide on a target and execute.

Avoid hitting into the Net

I remember watching a match in Regent’s Park Tennis Centre in a spare hour between personal training clients in central London. One of the players hit the ball really hard, and ran fast to every ball, looked really strong and athletic, but his efforts were ruined by hitting the ball into the net again and again. He was getting so angry with himself, but couldn’t seem to find a way to get the ball over the net with consistency.

One of the tennis coaches came and sat at my table. I pointed out this poor guy whose ball kept landing in the net and how frustrated he was getting, and the coach said, “Topspin. This guy needs more topspin.”

Topspin is the magic formula which solves several problems at once. The steep upwards racket path through contact with the ball gets your ball safely over the net, then the topspin kicks in to make your ball dip into the opponent’s court. You can hit the ball really hard and it won’t go out. Magic!

For good topspin you need to get several things right at the same time. You need to attack the ball from underneath (knee bend, racket dip before contact). You need a steep upwards racket path through contact. And your racket face needs to be just right, not open on contact with the ball (correct grip needed here).

However, too much topspin is not good either, as the ball will go too high over the net, and dip into court too early, resulting in a short ball. You need the right combination of a powerful flat shot, and a topspin shot, for speed and depth.

When I lived in north London, I joined two tennis clubs in Highgate, a couple of hundred metres from each other, to double my chances of finding opponents and a free court. One was a small club with three clay courts, the other was a bigger club with six hard courts. So I also got the fun of a variety of surfaces.

At the smaller club, the oldest member was a guy called Ted. I think he was in his seventies. “Make space!” he would shout at me whenever I was on the court, “Make space!” My unofficial tennis coach explained to me that I was always too near the ball on contact. I wasn’t hitting the ball early enough, out in front of me. And I wasn’t making contact out wide enough, leaving me cramped.

Fast forward to last year, and I was given a free lesson from Gavin Rumgay, a tennis coach in London whose claim to fame is that he beat Andy Murray in the juniors. He pointed out these two faults too, particularly the lack of lateral space on both forehand and backhand. A wider stroke gives you more runway to accelerate up to the ball, what Wimbledon commentators call “opening your shoulders”. It enables you to hit with more relaxed flowing power.

Next time you’re out on court, try hitting the ball earlier, and also create more lateral space so you’re hitting out to the ball. This combination of forward and lateral space will give your shot a more professional look, and the results will speak for themselves.

Dominic Londesborough is a personal trainer in London and keen tennis player.